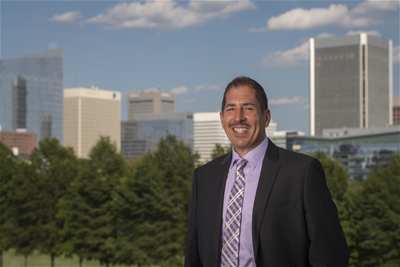 John Venuti is currently serving as Associate Vice President of Campus Safety/Chief
of Police for Virginia Commonwealth University and the VCU Health System. Chief
Venuti oversees Public Safety, and Emergency Management. The VCU Police
Department has 99 sworn police officers and over 250 security officers making it the
largest university police department in the state of Virginia and one of the largest
nationally as well. VCU is a major public research university with over 50,000
students, faculty, and staff. The VCU Police Department serves the VCU Health
System and the Monroe Park Academic campus.
John Venuti has a degree in Culinary Arts, from the Culinary Institute of America and
a Bachelor’s Degree in Management and Leadership from Bluefield College. John
Venuti is a graduate of the FBI National Academy, FBI LEEDS, and the IACP
National Law Enforcement Leadership Institute on Violence Against Women. Chief
Venuti has also served as the law enforcement subcommittee chairperson for
Governor Terry McAuliffe’s Task Force Combating Sexual Assault in Higher
Education in Virginia. In 2015 Venuti was named Campus Safety Magazine’s Campus
Public Safety Director of the Year, and was named as a top 40 candidate for
Richmonder of the year for his contributions to public safety. The VCU Police
Department has also been the recipient of numerous State and National awards for
accomplishments in public safety.
Venuti served 26 years with the Richmond Police Department. Formerly, a Major in
the Richmond Police Department, Venuti supervised the Support Services Division of
the Richmond Police Department. Venuti worked proactively to target violent crime in
Richmond, Virginia.

Getting Buy-in for Your Campus Security & Safety Programs: Sage Advice from Past Directors of the Year