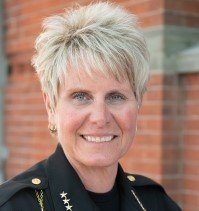 Alice K. Cary was born and raised in Flint Michigan. She earned a bachelor’s degree in Criminal Justice and master’s degree in Criminal Justice Management. Cary began her criminal justice career in Saginaw, Michigan in 1987, where she spent 11 years as a police officer. In 1998, she became a Deputy Sheriff and State tooper on and around the Wind River Indian Reservation in Riverton, Wyoming. Cary moved to Oregon in 2010 to work as a domestic violence and sexual assault investigator. Four years later, she joined the University of Oregon, where she worked her way up the ranks from patrol sergeant to acting Chief.

In June 2018, Cary became Chief of the University of Maryland, Baltimore Police Department (UMBPD). She created a Community Outreach And Support Team (COAST), which includes homeless outreach, a neighborhood liaison, and proactive community outreach. Cary gave the agency a new look – from uniforms and vehicles to new portable radios and state-of-the-art Computer Aided Dispach. She created a new Police and Emergency Management Public Information Officer, a position which broadened the department’s social media presence and external outreach. Under Chief Cary, the UMBPD has also created a Comfort K-9 program, added electric vehicles for better visibility, and championed transparency and connectivity between the UMBPD and the community it serves.