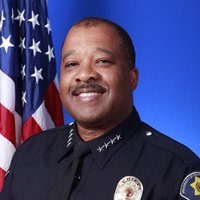 A product of South Los Angeles, he graduated from Crenshaw High School before attending UCLA. He holds a BA in Political Science/Liberal Arts and holds a Master’s Degree in Executive Leadership from the USC Price School of Public Policy.

He is also a member of the International Association of Campus Law Enforcement Administrators (IACLEA), the Police Executive Research Forum (PERF), the International Association of Chiefs of Police (IACP), the National Organization of Black Law Enforcement Executives (NOBLE), the Oscar Joel Bryant Foundation and the FBI National Academy Associates.

Despite being a retired Los Angeles Police Lieutenant, he continues to “Protect and Serve” the people of Los Angeles as an LAPD Line Reserve Officer working patrol and other assignments throughout the city.